(gained independence from the Republic of Sudan in 2011)

Republic of Uganda
Jamhuri ya Uganda 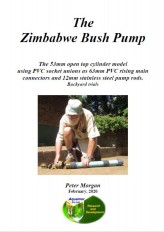 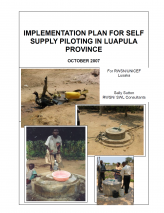 Implementation Plan For Self Supply Piloting In Luapula Province

Zambia, despite a total rural population of almost 8 million, has a low density rural population in many areas (around 14/km2) whose dispersed nature makes it difficult to serve sufficient people for handpump sustainability. At the same time much of the North of the country has plentiful groundwater reserves at shallow depth, allowing easy well construction. As a result, country-wide over 40% of protected supplies are lined shallow wells and only 13% are boreholes. Some 30% of handpumps 40% of households, (more in North-western, Western, Northern and Luapula Provinces) have dug their own (unlined) wells and increasing numbers are doing so every year. The ease of making such alternative supplies, and the low coverage by conventional communal supplies means that many are much nearer to a traditional source than a protected one, and even in communities which are theoretically ‘covered’ preference for the convenience, taste of water from traditional sources may lead to their continued use .

RWSN commissioned a study in 2006 to re-assess the situation for implementing self-supply in Zambia and this also helped to re-kindle interest. This report is the next step in response to a request from UNICEF and RWSSU, proposing an implementation plan, particularly for Luapula, but also drawing attention to the potential in Northern and Western provinces. | » 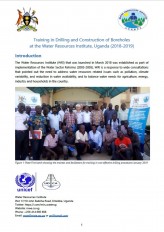 Training in Drilling and Construction of Boreholes at the Water Resources Institute, Uganda (2018-2019)

The Water Resources Institute (WRI) that was launched in March 2018 was established as part of implementation of the Water Sector Reforms (2003-2005). WRI is a response to wide consultations that pointed out the need to address water resources related issues such as pollution, climate variability, and reduction in water availability, and to balance water needs for agriculture, energy, industry and households in the country. The Water Resources Institute has continued to conduct applied trainings, which this reports outlines. | » 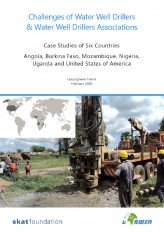 This study documents, for the first time, water well drillers associations in six countries, presenting the issues faced by them in their different country contexts. The study set out to enable learning and sharing, as well as to open up opportunities for future collaborations, volunteering and study visits. | » 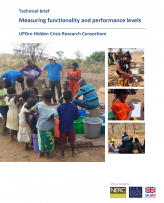 This technical brief is aimed at sharing the learning and approaches developed by the UPGro Hidden Crisis Research Project to look at how the functionality and performance levels of boreholes equipped with handpumps (HPBs), can be assessed using a common set of definitions and methods. A tiered approach to defining and measuring functionality is found to be useful to examining functionality for different scales and purposes of monitoring. This report is aimed at national and regional actors involved in the provision and monitoring of rural water supply functionality.

The brief sets out the tiered functionality definitions, and accompanying survey methods, which were developed by the project and have been applied in functionality surveys across Ethiopia, Uganda and Malawi. | »