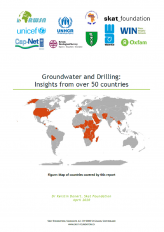 Groundwater and Drilling Insights from over 50 countries

This report draws together the insights on drilling on groundwater and drilling from 181 participants that were shared on the 2018 and 2019 UNDP Cap-Net/Skat Foundation courses entitled Professional Management of Water Well Drilling Projects and Programmes. The report provides insights into groundwater dependency, self-supply, groundwater data, siting, supervision, procurement and contract management, the institutional and legal framework, and the drilling industry from over 50 countries. | »

The RWSN Leave No-One Behind Group in collaboration with SNV hosted a three-week E-Discussion on inclusive management innovation from 12th of November to 4th of December 2018. This e-discussion aimed to go beyond inclusive design, exploring the implications of management innovations for gender and social inclusion in rural water supply. Three topics were explored:

1. Gender and Social Inclusion Issues within Rural Water Supply Management Innovations.
2. Strengths and weaknesses of innovative management models to ensuring equity
3. Government role and responsibility of realising the right to water in their jurisdiction | » 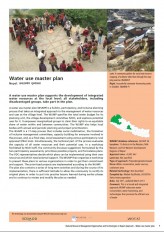 A water use master plan supports the development of integrated water resources at the local level; all stakeholders, including disadvantaged groups, take part in the plan.

A water use master plan (WUMP) is a holistic, participatory, and inclusive planning process that takes an integrated approach to the management of water resources and uses at the village level. The WUMP specifies the total water budget for its planning unit, the village development committee (VDC), and explores potential uses for it. It empowers marginalized groups to claim their rights to an equitable share of water within and between communities. The WUMP also helps local bodies with annual and periodic planning and project prioritization. | »

This field note provides an overview and analysis of the historic developments of promoting Domestic Rainwater Harvesting (DRWH) in Thailand between 1980 and 2015. Based on literature reviews and interviews with stakeholders a series of factors were identified which made the promotion of DRWH in Thailand an exceptionally successful example of diffusion of innovations. Among the key factors identified were policies, market structure, pre-existing habits, affordability, supply chain and climate. No single factor was decisive but several of them occurring simultaneously made it possible for an enabling environment to form and make the initiative flourish even after government funding ran out (most of the Thai Jars, which are most commonly used for rainwater storage, were actually delivered through the private sector and paid by the consumers).
In spite of its large-scale success, the Thai Jar Experience is not a blueprint for replication elsewhere but points out to the importance of cultural and economic aspects, as well as to an enabling environment in general. | »

The RWSN Asia-Pacific Learning event was held in Bangkok, hosted by The World Bank, SNV and WaterAid Australia. 57 delegates from 14 governments attended to share knowledge and expertise on rural water services. | »