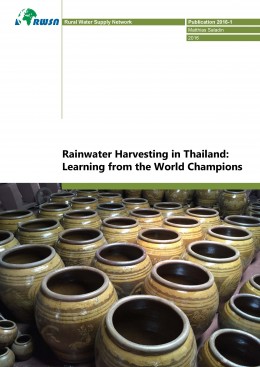 This field note provides an overview and analysis of the historic developments of promoting Domestic Rainwater Harvesting (DRWH) in Thailand between 1980 and 2015. Based on literature reviews and interviews with stakeholders a series of factors were identified which made the promotion of DRWH in Thailand an exceptionally successful example of diffusion of innovations. Among the key factors identified were policies, market structure, pre-existing habits, affordability, supply chain and climate. No single factor was decisive but several of them occurring simultaneously made it possible for an enabling environment to form and make the initiative flourish even after government funding ran out (most of the Thai Jars, which are most commonly used for rainwater storage, were actually delivered through the private sector and paid by the consumers).
In spite of its large-scale success, the Thai Jar Experience is not a blueprint for replication elsewhere but points out to the importance of cultural and economic aspects, as well as to an enabling environment in general.