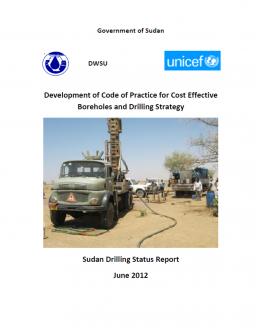 The Government of Sudan has developed National and State Water, Sanitation and Hygiene Strategic Plans for 2012 to 2016. Under the plans it is envisaged that several thousands of boreholes will need to be drilled annually to meet the water supply targets. The Government with UNICEF support developed 10 Principles for Cost Effective Boreholes which were adopted by stakeholders at a workshop in Khartoum in 2009 as the framework for future borehole provision in the country.
This is the report of a study to evaluate the status of drilling and drilling practices within the framework of the 10 principles and from it develop a National Code of Practice for Borehole Construction and a National Drilling Strategy for Sudan. Information were collected from the public and private sectors and the NGOs in 8 states.

DISCLAIMER: This is a non-RWSN publication and endorsement by RWSN or any of its member organisations should not be inferred.