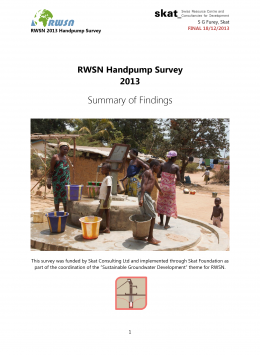 Manual pumps have been used for centuries but this simple technology remains the mainstay of rural water supplies in many countries. The Handpump Technology Network (which later became RWSN) was set up in 1992 to promote collaboration and standardisation so that handpumps could provide more reliable and better quality rural water services.

This survey is aimed at practitioners in government, NGOs, private sector and development partners who are directly involved in rural water service implementation, or who are involved in the procurement of handpumps or spare parts (as either a buyer or seller).