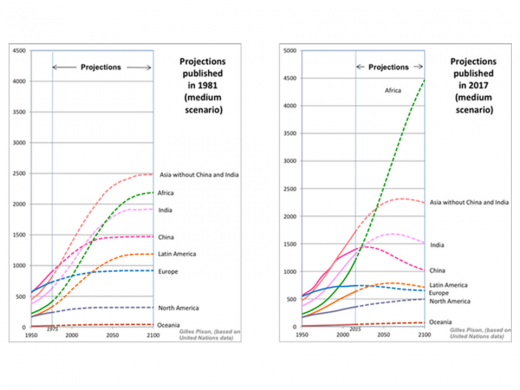 Rural population in Sub-Saharan Africa is projected to continue growing for decades to come. In spite of urbanization, rural populations are not going to disappear. Both as individuals and as organizations, we need to spend more efforts in reaching out to the people in rural areas, and we need to come up with more diversified strategies to facilitate the delivery of services to these people.

There is no doubt we live in a world which is rapidly urbanizing. Almost without exceptions, reports on global trends (sometime called “Megatrends”) highlight this process and the fact that we probably already passed the point in time the people living in towns and cities outnumber populations in rural areas. However, this is only part of the picture, and the other part is often overlooked, particularly for the case of Sub-Saharan Africa (SSA):

In 2015, an estimated 62 % of people in SSA were living in rural areas.
By 2050, the estimated SSA rural population is projected to be 980 million – a 63 % increase – reaching one third of the world’s rural residents – and it will continue to grow well after the turn of the mid-century.
Sub-Saharan Africa is the only region in the world where rural population will continue to grow after 2050.
These figures – cited from a recent FAO publication (Rural Africa in Motion) – show a picture for Sub-Saharan Africa which is very distinct from the rest of the world, making the authors conclude that “It is a unique demographic feature in world history, which even China and India have never faced.” You may argue that these are just predictions and that 2050 is far into the future, but much of the growth is actually already given by current demographics, just by the fact millions of people will get into the fertile age. Even if African fertility were to fall right now to the level in Europe and China (1.6 children per woman) – a highly unlikely scenario – the population would continue to increase for several decades, reaching 1.6 billion in 2050[1].

The numbers cited here are actually derived from a “medium scenario” and therefore may have to be corrected upwards in the future. Population estimates for Africa continuously had to be increased over the past 40 years of predictions (see this article for an analysis of the reasons for these adjustments).

So much for the numbers. Putting them in context of RWSN, this has several implications – one of them being that the “R” for Rural in our name continues to be of high importance. Even in an urbanizing world, rural populations will continue to exist, and all stakeholders are challenged to think about how to deliver services (and products) to these people. Global numbers from the SDG baseline report showed that four out of five people worldwide without access to basic or safely managed water services worldwide live in rural areas.

Thus, the challenges we are facing currently in reaching out to rural populations are not going to disappear, and among other things, governments will have to re-consider their funding priorities, as most funding in the water sector continues to go to urban dwellers[2]. Both as individuals and as organizations, we need to spend more efforts in reaching out to the people in rural areas, and we need to come up with more diversified strategies to facilitate the delivery of services to these people. By 2050, almost a billion people in rural areas of Sub-Saharan Africa will need access to safely managed drinking water, among other things, and business-as-usual will not do the trick.