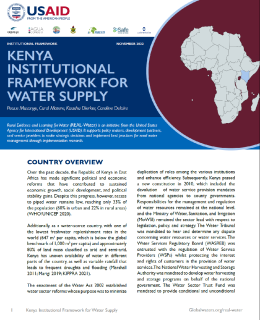 Over the past decade, the Republic of Kenya in East Africa has made significant political and economic reforms that have contributed to sustained economic growth, social development, and political stability gains. Despite this progress, however, access to piped water remains low, reaching only 33 percent of the population.

Additionally, as a water-scarce country, with one of the lowest freshwater replenishment rates in the world and approximately 80 percent of land mass classified as arid and semi-arid, Kenya has uneven availability of water in different parts of the country, as well as variable rainfall that leads to frequent droughts and flooding.

The enactment of the Water Act 2002 established water sector reforms whose purpose was to minimize duplication of roles among the various institutions and enhance efficiency. Subsequently, Kenya passed a new constitution in 2010, which included the devolution of water service provision mandates from national agencies to county governments. Responsibilities for the management and regulation of water resources remained at the national level, and the Ministry of Water, Sanitation, and Irrigation (MoWSI) remained the sector lead with respect to legislation, policy, and strategy.

At the county level, the Water Works Development Authority is responsible for the development, maintenance, and management of national public waterworks and for the provision of technical services and capacity building to county governments and WSPs within the area of their jurisdiction. WSPs are responsible for water service provision within their licensed area.

Since 2000, the Kenyan government and development partners have significantly increased overall spending on water. Kenya’s National Water Master Plan 2030, which was launched in 2014, estimated that $14 billion in investment in the water supply was needed over the next 15 years.To increase progress toward the 2030 Sustainable Development Goal for water, a sharp increase in the mobilization of new resources will be required.

This document is produced by USAID’s REAL-Water activity.